A new addition to the Soviet fleet – the Project 7U Destroyer. Ships of this class served in defense of the Soviet Union from the earliest days of its involvement in the Second World War. 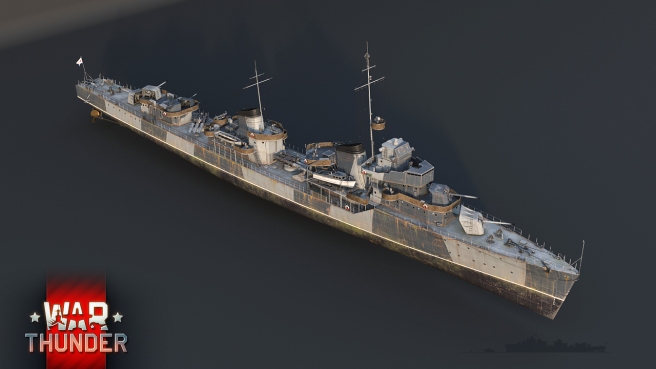 Naval commanders can look forward to experiencing all the advantages and disadvantages of the Project 7U destroyers in War Thunder. The Project 7U is a comparatively slow, highly resilient and superbly armed vessel. Her main power system consists of two engine rooms and two boiler rooms. This Soviet giant has a nominal output of around 60,000 hp and can reach a respectable speed of 36–38 knots (up to 70 km/h). The destroyer has a crew of 271, most of whom service the ship’s enormous arsenal. The destroyer features four 130mm cannons, two on the bow and two on the stern. The four cannons are supplemented with torpedo armament in the form of two three-barrel automatic weapons, as well as depth charges. The anti-air armament includes several calibres: two 76mm guns on the stern, three 45mm semi-automatic guns behind the first funnel, and four 12.7mm DShK machine guns placed at the front of the destroyer.

The main objective for Project 7U destroyers in War Thunder battles will be taking on their destroyer “classmates” and providing artillery support during small fleet maneuvers. The placement of the anti-aircraft guns is far from ideal, limiting the arc of fire and leaving the destroyer relatively vulnerable to aerial attacks. Destroying a huge Project 7U ship isn’t easy, which is why commanders should concentrate on controlling and aiming the ship’s guns during battle. Reloading her main cannon takes more than 11 seconds, even with a highly skilled crew. However, opponents will certainly know when they’ve been hit – the 130mm shells deliver crippling damage, while a precise torpedo strike is more than enough to halt the advance of enemy boats.