This is what I meant when I said that I was writing an article about an “unorthodox weapon”. It’s an impressive vehicle. Hope you guys enjoy the article.

Marvin John Heemeyer (born in South Dakota, October 28,1951), a successful welder, owned two muffler shops named “Mountain View Muffler” in Granby and nearby Boulder, Colorado. He was known by the town for fighting civil issues such as a failed proposal to bring gambling to Grand Lake, Colorado (where he lived) in 1994.

The town of Granby allowed a cement plant to be located near Heemeyer’s muffler shop in 2000. This angered him over the noise, dust and the limited access to his shop. Heemeyer tried to convince Cody Docheff, the project’s operator, to sell his property, but ultimately failed.

In 2001, the town sided with the concrete plant. Heemeyer countered this with a lawsuit which failed again.

In 2003, he found himself involved in another conflict with the town concerning whether he should be connected to the town’s sewage system. Heemeyer was not part of the system. He was forced to pay the $2500 fine and wrote a check which he enclosed the note with “cowards” on it.

He plotted his revenge. This involved his Komatsu D355A bulldozer. He had originally purchased it to construct roads to his shops. In March 2003 Heemeyer deeded his house to friend and lived in his shop. He then sold off both of his shops and the building that housed his bulldozer.

However, he kept 185 square miles (479 square kilometers) of closed off land where the bulldozer was moved to in December the same year. For six months, he used his welding skills to armor up his bulldozer so he could use it for his revenge. 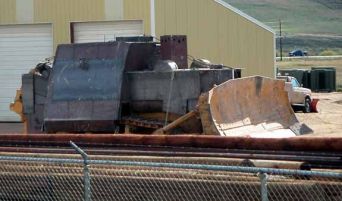 The default 49 ton Komatsu D355A bulldozer is powered by a 410 hp (305 kw) engine. It had a top road speed of 7.45 mph (12 km/h) and a horsepower per ton of 8.36. Heemeyer’s armored version brought the weight up to 61 tons. This most likely slowed the bulldozer somewhat and decreased the horsepower per ton to 6.7. 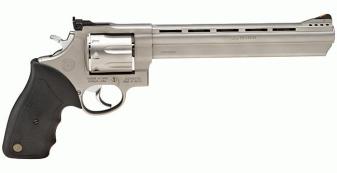 The armor consisted of two half inch (12.7mm) steel plates with concrete in the middle and bonded plexiglas which gave it the same benefits of composite armor. This proved very effective against small arms fire, armor piercing ammunition, and grenades. 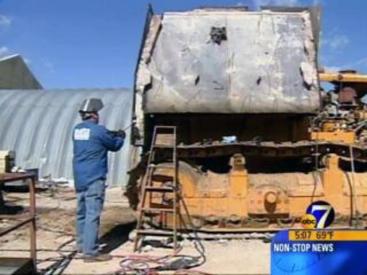 The cameras which allowed Heemeyer to see his surroundings were connected to three monitors and protected by three inch (76.2mm) bulletproof plastic. The armored Komatsu D355A bulldozer also had a sophisticated air filtration system and air conditioning system.

On June 4, 2004, Heemeyer greased up his bulldozer to make it harder for people to climb on top before he bolted himself shut inside. His first target was unsurprisingly the cement plant near his former business.

While this factory was being destroyed, the owner, Cody Docheff, drove one of his own construction vehicles to try and stop the destruction. Heemeyer saw this and quickly charged towards Docheff’s vehicle. Docheff regretted his decision. His vehicle was not big enough to stop the bulldozer so he tried to make his escape by driving away. Heemeyer rammed the rear of Docheff’s vehicle.

During his rampage, he managed to destroy a local bank, hardware store, the town hall, the police department building, the home of Granby’s deceased former mayor, the town’s library, local newspaper office, former judge’s home, and an enormous amount of cars. He spent a few minutes trying to ignite the local gas company’s storage tanks by firing at them with his .50 cal rifle. Luckily, they did not explode or catch fire.

After being sealed by an industrial loader inside a group of buildings, Heemeyer in his armored Komatsu bulldozer tried to escape by ramming through buildings. The chaos stopped when the bulldozer collapses inside a store’s basement. 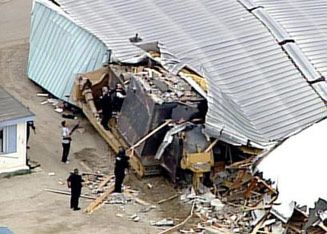 Police officers charged towards the bulldozer but it was covered with grease which made it tougher for them to get on top of the machine. Colorado’s governor considered using the Apache’s Hellfire missiles from the Colorado National Guard to destroy the vehicle, but it was already bogged down inside a basement. Heemeyer committed suicide with his .357 (9.1mm) Magnum revolver. His armored bulldozer was stuck. He could see no way out and he did not want to go to jail.

Fortunately, there were no civilian or police deaths, however, Heemeyer had caused seven million dollars of damage to buildings and vehicles. It took twelve hours with a blowtorch to enter into the cabin of the armored bulldozer to retrieve his dead body.

Heemeyer is seen as a patriotic American for standing up to the government by some and a terrorist by others. C4, grenades, and more than 200 bullets were used against the bulldozer and had little to no effect. A few people in Granby proposed a yearly celebration of the incident to generate tourism. The idea was rejected. The armored bulldozer was scrapped.

Luckily, insurance and state aid came to help the ravaged town of Granby and it quickly got back onto its feet. After Heemeyer’s rampage, it received the reputation as the “Killdozer”. Funny enough, this isn’t the first kind of attack in Colorado. In 1998, a man named Tom Leask conducted an attack with a government owned front end loader in Alma, Colorado. He managed to destroy the town’s post office, town hall, fire department building, and water department building until he was shot dead.

Armored bulldozers are nothing new and are present in many conflicts as professionally manufactured or improvised combat vehicles. This bulldozer is particularly interesting due to how well it protected him from C4, grenades, and armor piercing ammunition. Plus, it only took one expert welder to make this impressive contraption.

The Israeli Defense Forces has different armored versions of the D9 Caterpillar with slat armor and a protected cabin; other examples include the British Centaur bulldozer, Japanese Type 75 bulldozer, American D7G Caterpillar bulldozer, armored bulldozer used by the Sri Lankan Armed Forces in Sri Lanka against the LTTE (Liberation Tigers of Tamil Eelam), and dozens of unnamed improvised bulldozers in various conflicts. 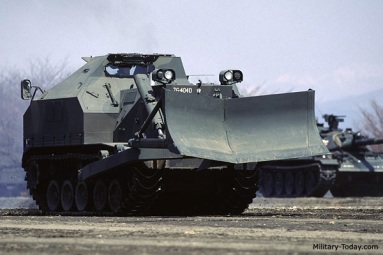