We see all of those gorgeous tanks with schürzen armor plated to the sides (Pz IV for instance), but what are they there for? Let’s find out.

Edit: I have revised the initial text of the article. Thanks to our readers for the input.

The early Panzers weren’t very well armored (Pz IV had 20mm of frontal in the beginning), but were uparmored after the Soviets surprised them with the T-34 and KV-1 tanks. Eventually the Pz IV was upgraded to have 80mm of frontal armor. The Panzers would get too heavy if the armor needed to be upgraded even more, especially side armor. The issue was that the 40mm side armor could often be penetrated by anti-tank rifles on the Russian front; in order to combat this the Schürzen were added. Their purpose was to make the projectile start to tumble and break off its penetration course.

The addition of the Schürzen also proved useful against shaped charges (often referred to as HEAT). Because we do not have AT rifles in World of Tanks, the main focus will go to the HEAT shells. In order to understand how Schürzen helped defeat HEAT, we need to check how HEAT works.

The Schürzen were very thin 5mm thick plates of steel; hence saving weight of added armor, but increasing protection. The HEAT shell gets to work when it impacts and is completely dependent on the shaped charge reaction on impact; hence the penetration of the shell never drops over distance.

The HEAT shell would strike the skirt, jolting a hot beam of copper through the skirt, but losing a lot of its kinetic energy in the process, it would then continue to try and penetrate the actual armor of the tank, but failing as the reaction lost too much power already. The Schürzen proved to be very effective. It would be rolled out on (almost all) variants of the Panzer III, IV and  Panthers.

This also explains why HEAT does not work very well against spaced armored targets in World of Tanks and why your HEAT gets absorbed by tracks (tracks count as spaced armor).

The Panzer IV H as depicted above was pretty much covered in Schürzen, but this proved troublesome in the thick overgrowth of the Boucage in Normandy. The bushes and branches would get stuck there, pulling down foliage and sometimes ripping off parts of the metal (a not so very conspicious way of moving around). Therefore the newer Pz IV J would get rid of the side schürzen, but would keep the Schürzen on the turret; some where provided with lighter weight mesh (as seen on the Pz IV S in-game). The newer tanks like the Panther and Tiger II had Schürzen covering the side of the tank, pretty much over/next to the tracks, preventing this problem.

You might have seen modern vehicles having cages around them (slat armor) and they serve the same purpose as the added benefit of the Schürzen. The commonly used RPG-7 rocket relies on the same principle of the shaped charge. The cage defeats the projectile. 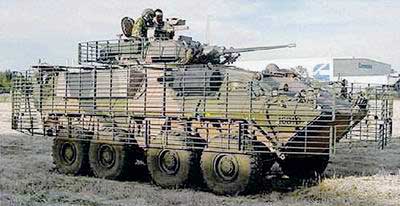