Link to more details about Physics and Sound: LINK

We’re planning to make adjustments to the characteristics of a number of premium vehicles. While selecting which vehicles to upgrade, we sought to improve their technical characteristics without making them overpowered, and also kept player satisfaction and user-friendliness in mind.

Most of the changes have been made to tanks that were added to the game a long time ago, so that they will be able to fight evenly in today’s random battles. We also took note to not radically change the gameplay of any vehicle, so that vehicles will generally feel familiar despite the changes made to them.

The following premium tanks will be updated to be more competitive in today’s random battles:

The following premium vehicles will be updated for ease of use in battle:

The T-22 medium will see many changes to its statistics.

The T-22 med. is a multipurpose vehicle that has all the striking features of Soviet medium tanks, and outstanding armour due to its special hull design. All these features have caused the T-22 medium to outperfom its peers, so it was decided to review the performance characteristics of this vehicle to make its performance more comparable to researchable Tier X medium tanks.

The T-22 med. will retain its excellent armour, and the players who earned it will remain owners of a powerful and unique combat vehicle.

These characteristics may see further changes, depending on the results of testing.

In the Japanese tech tree there is an evident bias regarding vehicles popularity. The vast majority of players are concentrated on the medium tiers, from V to VI.

Also, these tanks are significantly distinguished by their combat effectiveness against their peers from other branches. To resolve this situation, it was decided to make changes to vehicle characteristics in order to balance the combat capabilities of Tier VI heavy tanks.

At the same time, Tier III and IV tanks were a little weaker than their peers, so the changes to vehicle characteristics were generally made to improve the tanks’ combat capabilities. 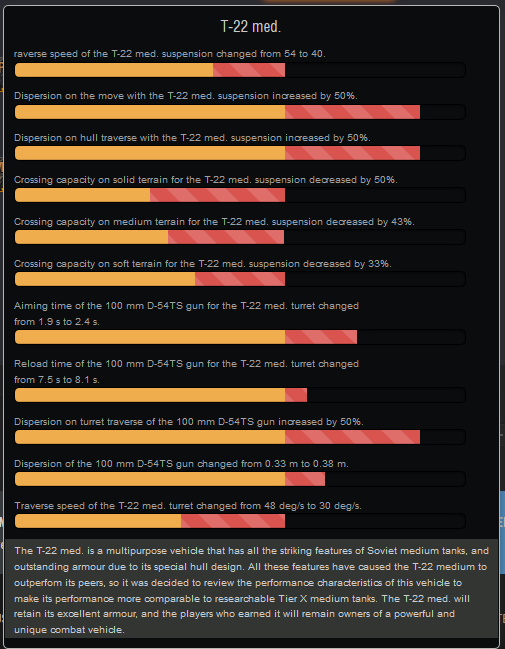 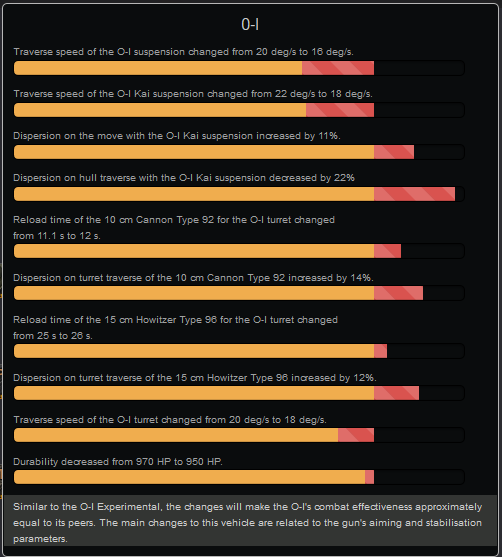 Link to buffed tanks (scroll down to the tech-tree like thing then hover your mouse over it):