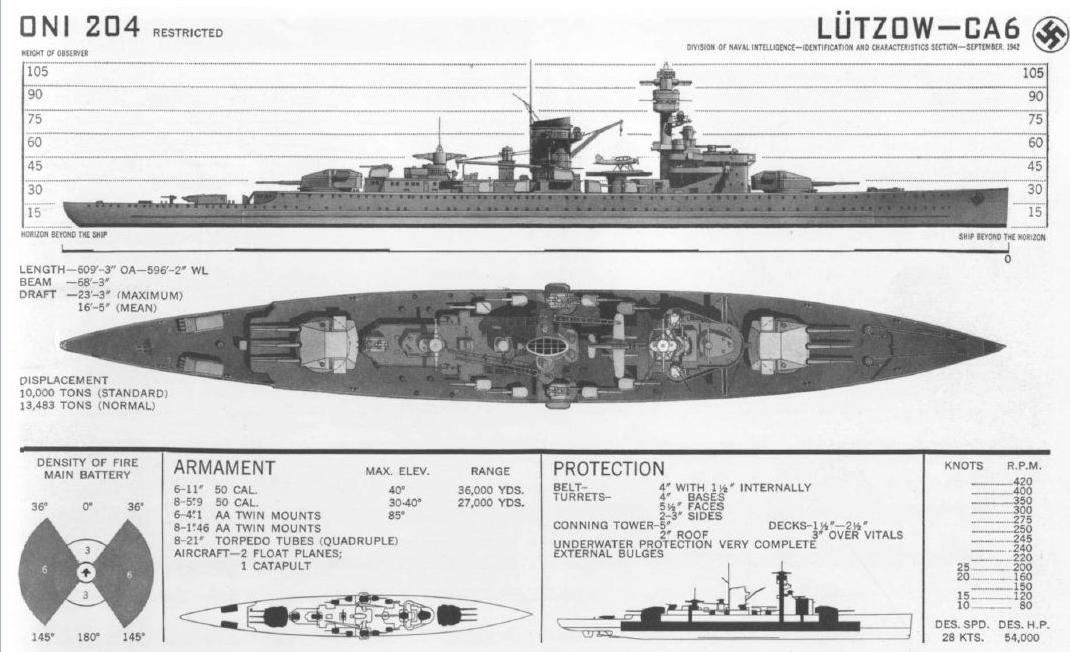 Being a total Kriegaboo, I have always been speculating about how some ships of the Kriegsmarine will be implemented into the game. Today we are going to talk about the Deutschland Class Heavy Cruiser. These ships were unofficially characterized as “pocket battleships” because of unusual eleven inch guns. Mostly the three ships of this class, the Deutschland (later renamed to Lützow), Admiral Scheer, and Admiral Graf Spee mostly served by harassing allied shipping in the Atlantic Ocean.

Before we get in to the speculation side of this post, lets start with what we know graciously stolen from Wikipedia.

Deutschland Class in World of WarshipsTM

The Deutschland Class is a hard class to place in the game because of its highly unusual armament. With it having a six gun eleven inch broadside, this should give the Deutschland Class the heaviest broadside of any cruiser in the game, excepting the Alaska which is technically a large cruiser not a heavy cruiser, thanks to it’s 300kg shells. As a comparison this would make its broadside ~37% heavier than a Mogami with its ten gun eight inch broadside and a 24% heavier broadside than a Des Moines. It also should be noted that the eleven inches reloaded at rate of 2.5 rounds per minute IRL and had an exceptional range of 36.5 km. The Graf Spee was also outfitted with radar equipment late in the war which was used for gunnery as well.

Also worth noting is its eight six inch guns secondaries and is eight torpedo tubes which give this ship a menacing set of secondaries. The Graf Spee was also outfitted with radar equipment late in the war which was used for gunnery as well.

The final form of the Deutschland Class AA guns should be what was equipped on the Admiral Scheer. It was equipped with with six 4 cm (1.6 in) guns, eight 3.7 cm guns, and thirty-three 2 cm guns. This should give the class middling AA. Compared to IJN and USA counterparts, Deutschland’s are lacking in the Dual-Purpose guns as it’s six inchers are too heavy for AA duty but has a respectable amount of smaller caliber guns. My prediction is average at best AA.

The armor on the Deutschland Class Cruisers is pretty light for the title of “pocket battleship” It’s armor is roughly comparable to a Mogami so don’t expect any magical German armor to protect you in this cruiser.

At only 26 kts the Deutschland Class is also relatively slow compared to IJN and US counterparts which tend to run at 30+ knots. However it should be noted that the ships exceeded this speed in their trials, the fastest of which was the Admiral Graf Spee at 29.5 kts. It is really up to Wargaming to set the in game speed for these ships although I would expect to see them closer to 30kts rather than 26kts.

The Deutschland Class largest advantage is it’s large caliber main battery. and complement of secondary weapons. Most of its other statistics such as armor and speed are nothing impressive. It should have exceptional range and solid accuracy with its broadside of 11in guns as well as great brawling abilities with its torpedoes and secondary six inch guns.

However with its slightly lower speed and average at best armor, this ship should not take hits all too well so be careful where you sail as this ship is a true German glass cannon.

I would place this ship anywhere from tier 7-10 leaning towards closer to 10 in the 8-9 range depending entirely on how Wargaming balances the ship when it is added to the game.

I hope you all enjoyed reading this write up. Leave comments below with any facts you would like to share or any feedback on the article. Thanks!