We realize that this is no small change and that you’ll likely have some questions, so we’ll be making another publication with answers soon after this one is published.

Almost 7 years have passed since the game’s release, and one of the most important components of World of Warships — the economy — has remained largely unchanged. Over time, we’ve drawn up a long list of things that could be improved or changed. When we started working on the popular idea of separating the economic bonuses from the visuals, we realized that this entailed many other changes.

We plan to release this update in late summer or early fall, but you can check out all the details now.

Below you will find:

The main goals of the update

The basic principle is that, in total, your economic earnings will not be negatively affected — in some cases, you’ll even get more. The main goals of the update are the following:

Besides that, we’re improving the interface, bonus management, stock display, and more.

This is a short list of key changes. If you’re interested in more details about these and others, you can find them in other sections below. 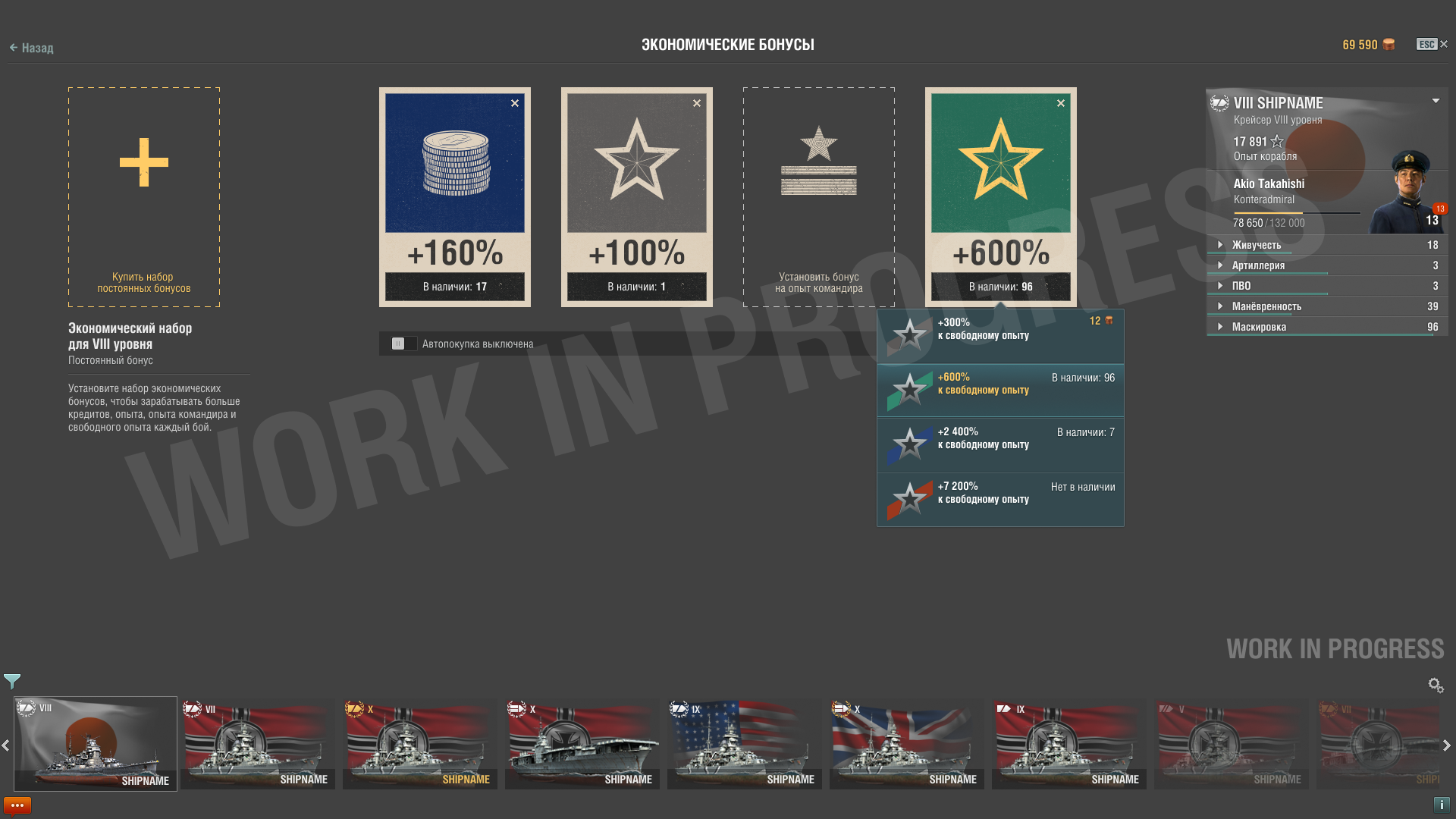 Details of the change

Depending on type, bonuses can have the following values:

Bonuses from the last row will be especially rare. They can be compared to using all the available signals and best camouflages in the current system, and such bonuses to credits and XP were previously impossible and would be very rare to obtain.

We separated these two concepts to make it more convenient to use large stocks of bonuses. Auto-resupply, i.e. the automatic assignment of the same bonus instead of the used one (if it is present), will always be enabled. Doubloons are not used in this case.

You can enable auto-replenishment at your will — the used bonuses of the first two values (e.g. +20% and +40% credits) and camouflages will be automatically purchased.

In the current system, the XP bonus increases the amount of both Free and Commander XP. This makes it difficult to calculate and decide which bonuses to use, so with the release of the change, the XP bonus will no longer have an effect on Free and Commander XP. To ensure that the maximum possible earnings of these resources are not changed, all economic bonuses in the new system are increased accordingly.

In addition, the base amount of Free XP gained is increased from 5% to 10%.

In the sections below you can see examples of how the profitability will change with the release of the change, and if you want, you can use the calculator to compare the current and new systems yourself.

The service cost reduction bonus is at its core a bonus to credits, but its value depends greatly on the Tier of the ship it is used on. For example, the India Bravo Terrathree signal reduces the service cost by 10% and can be sold in the Inventory for 3,000 credits. The service cost for ships of Tiers lower than VII is less than 30,000 credits (for example, 23,000 for Tier VI), so instead of using this signal on these ships, it is actually more profitable to sell it. The necessity to check whether an economic bonus is worth using on a ship is a noticeable inconvenience of the current service cost reduction bonus. To simplify the system and increase the benefits for players, we decided to remove or replace this bonus.

Service cost reduction bonuses on permanent camouflages will be replaced by an equivalent bonus to credit earnings, and at Tiers below IX, it will be noticeably more profitable. Also, the service cost of Tier IX and X researchable ships will be reduced, and the credit earnings in Co-op will be slightly increased.

On average, earnings with a permanent bonus on Tier IX – X ships won’t change, and on ships of lower Tiers they will increase. At the same time, they are even higher when playing well in battle. This makes the new system friendlier both for new players and for those who have been playing World of Warships for a long time.

Exchange of “big” bonuses into “small” ones

During the conversion process, we’re trying to give more big bonuses, even though it may reduce the total number of them on the account compared to the number of signals and camouflages. However, if you prefer to use smaller bonuses more often instead of big bonuses, you will be able to exchange big bonuses for smaller ones in the Inventory for some time after the change is released. The exchange is happening in such a way that you will keep the total bonus value. For example +7,200% to free XP can be split into 3 +2,400%, each of them splits into 4 +600% bonuses and lastly each of these – into 2 +300% bonuses. Bonuses can be exchanged only into the values existing in the new system, so for example, +100% to XP can’t be split into two +50%.

For example, if you have Yamato without any permanent camouflages or economic bonuses:

To show how the conversion system would work for you personally, we have prepared a calculator that you can use now.

Keep in mind that this conversion will give you slightly more bonuses, because the signals and camouflages mounted on the ships will also be taken into account. In addition, to accommodate for possible inconveniences of the transition to the new system, you will get one bonus of each type and value irrespective of your total amount of bonuses, for a total of 16 extra bonuses.

Later, in a second publication about this change, we plan to publish a portal version of the calculator which pulls the data about your belongings directly from your account.

This change and the addition of a new entity entails a change to all rewards in the game: in combat missions, campaigns, operations, and collections, economic and special signals are replaced by bonuses, and camouflages will be supplemented by boosters.

The contents of all containers that had signals or camouflages in them will also change.

You can try out different combinations of economic bonuses yourself and compare the current and new system in the calculator.

All examples below, for simplicity, are calculated for a battle in which you get 100,000 credits and 1,000 base experience. Permanent bonuses and premium accounts are not considered.

If you use Equal Speed Charlie London, Papa Papa, Zulu Hotel and Zulu signals, and Sci-Fi Space camouflage in the current system, they will be converted to the following bonuses:

If you use the best of these bonuses, you will gain more credits and all types of experience in the new system. In addition, you will still have bonuses of +200% to commander XP and +300% to free XP to be used in another battle.

If you use all economical and special signals and Sci-Fi Space camouflage in the current system, they will be converted to the following bonuses:

If you use the best of these bonuses, you will gain more credits and all types of experience in the new system. In addition, you will still have bonuses of +200% to XP, +300% to free XP and +800% to commander XP to be used in another battle.

If you use all economic and special signals and Mosaic camouflage in the current system, they will be converted to the following bonuses:

If you use the best of these bonuses, you will gain more credits and all types of experience in the new system except Commander XP. However, you will still have bonuses of +800% to XP, +2400% to free XP and +800% to commander XP to be used in another battle.

You can read more about how your items will be converted into new bonuses below.

With the release of the change, economic bonuses from camouflages and signals become separate entities. The rules are slightly different for permanent camouflages, expendable camouflages, and signals.

When the change comes out, you will get permanent bonuses with the best available values of your permanent camouflages for a particular ship.

For example. if you have the Type 17 permanent camouflage (Post-Battle Service Cost -10%; XP per battle +50%; Free XP +50%) for Gadjah Mada, you will receive the following permanent bonus for the ship:

Camouflages will remain on accounts and will influence only the visuals, and:

What bonuses you get depends on the specific camouflage. That said, the general rules are as follows:

In the current system, you can use several expendable bonuses of the same type at the same time, and the new system allows you to use only one for simplicity’s sake. To retain the ability to reach high bonus values, the conversion will be done as follows:

1. First, the player’s account is checked for the maximum possible bonuses of a particular type. For example, a complete “set” of signals for credits are Scylla, Leviathan, Basilisk, Wyvern and Zulu.

2. One signal can participate in several such sets. For example, Hydra gives a bonus to all types of experience. In this case, we count in what number of which sets the player’s signals participate in. The number of each type of received bonuses is equal to the minimum number of signals required for the bonus. For example, if you have 100 Scylla, Leviathan, Basilisk, and Wyvern each, but 80 Zulu, you will get 80 bonuses to credits.

3. The number of signals is reduced by only one value — by the smallest number of bonuses you receive that require signals of that type. For example, if you have to get 200 bonuses of each type except for credits and 100 bonuses to credits, the number of Scyllas will be reduced by 100.

4. After counting the number of bonuses for the signals sets, the remaining signals are converted into bonuses according to the following table

1 – The free XP bonus is given taking into account the XP bonus and the doubling in free XP earnings with the release of the changes.

To take into account the combinations of several signals from the old system, unaccounted by the full sets, after conversion there is a merging of bonuses received at the last step on the following table. There is a rounding up: if there are not enough bonuses, for example, there are only 2 bonuses +200% to XP, 1 +800% bonus will be given.

Bonuses for sets are not combined.

Besides that, you will also get one bonus of each type and value, 16 extra bonuses in total.

Expendable service cost reduction bonuses from signals or camouflages will be replaced by a temporary resource that can be exchanged at the Armory for various other bonuses. Bonuses from the first row (e.g. +20% credits) are planned to cost 3 tokens, second row – 6 tokens, third row – 24 tokens. After a couple of updates, these tokens will be automatically converted to credits.

A small number of flags, mainly for members of various volunteer programs and for winners of the King of the Sea tournament have economic bonuses. In the new system, these bonuses are not tied to the flags used and are always active if present on the account.

There are a total of three such “global” bonuses. The best bonus is always active.

Because of the “detachment” of bonuses to free XP and commander XP from XP, War college gives a bonus to XP only, so it is necessary to make changes to the structures of the Clan base:

Premium account will give a bonus to all experience types and credits in the same way as before the changes, with the exception that bonuses to overall experience do not affect free experience and commander experience.

First victory of the day

Combat signals will be controlled from the Equipment tab.

For ease of tracking bonuses, all owners of a special Missouri combat mission will instead receive an improved permanent bonus for credits: instead of +10% to credits they will have +40%.