We understand that testing a new class on the main server may be inconvenient, and we would like to thank you for playing submarines, playing against them, and for your feedback. Unfortunately, only real battles on the main server provide so much data and opinions to bring the mechanics of submarines and their counters to the point where they can be introduced into the game on a regular basis. We are happy to see from your feedback and stats that the changes made in 0.10.10 and 0.10.11 have improved gameplay and interaction between the new class and surface ships.

With both the changes already made and the upcoming changes to submarines and their associated mechanics, we want to achieve a gameplay that is balanced and interesting for both sides, in which the key objective of the new class is to attack the enemy from unexpected positions, at unusual timing. We believe it is most important to make the interaction between submarines and surface ships “healthy,” but at the same time that submarines are not too weak.

You can check all the graphs in this post in higher resolution by right-clicking on them and opening in a new tab.

The charts below show a comparison of submarine statistics in Update 0.10.9 and 0.10.11 at different Tiers.

Even taking into account the lifetime of submarines, which is comparable to destroyers and cruisers, other indicators of subs’ combat effectiveness are significantly inferior to other classes, so we will continue to tweak them based on the results of testing. In doing so, we see comfortable class interaction and balanced parameters as the key objectives, so we will look for ways to increase submarines’ influence in combat without creating frustrating situations for their opponents.

The key change to submarines since they were introduced to the main server is the change to torpedoes in 0.10.10, splitting acoustic guidance and damage increased from acoustic pings between the two torpedo types. The improvement made by your feedback made it possible to make the interaction between submarines and other classes healthier. At the same time submarines were not overpowered before the change, and with 0.10.10 the damage caused by submarines was reduced by about 25% more.

The two graphs below allow you to compare the average absolute and relative damage of Tier X ships of different classes in updates 0.10.9 and 0.10.11 (before and after changes of submarine torpedoes). For other Tiers the ratio is similar.

The first line is absolute damage, the second is relative damage.

Torpedoes are the only submarine weapon (if you don’t take secondaries and ramming possibility into account) that are relatively unreliable in dealing damage. Right now we don’t want to significantly increase torpedo parameters such as damage, reload time, and speed, as this significantly affects the perception of combat by surface ships. However, we strive to ensure that submarines are not significantly weaker than other classes. Therefore, we will try to find other ways to increase submarines’ influence in combat, but we will not completely rule out the possibility of improving their torpedoes if other options are unacceptable. One such way would be to improve submarine survivability: increasing survivability along with increasing depth charges damage would make submarines somewhat more resistant to artillery fire, but still extremely vulnerable to depth charges.

The increase in the duration of double-pinged sector time planned for 0.11.0 will redistribute the damage that submarines do with different ping effects. Currently, a significant amount of damage is done without sonar pings at all, although we believe that keeping the double ping effect on the target is what the submarine commander should strive for, as this interaction has both the skill requirements for the submarine player and the way to counter it from the surface ship.

The graphs below show the distribution of submarine damage by Tier as a percentage of their average damage in updates 0.10.9 and 0.10.11. The first two lines are the damage of the American submarine of the corresponding Tier, the second two are the German one.

One of the indicators we track is the distribution of battles according to the damage inflicted. Submarines have a much higher number of battles without any damage dealt than other classes. For example 32% of submarine games are without any damage at all, compared to 13% for destroyers on Tier X.

The graph shows distribution of battles by average amount of damage dealt by Tier X ship of specific class. Numbers at the bottom show damage values in thousands. 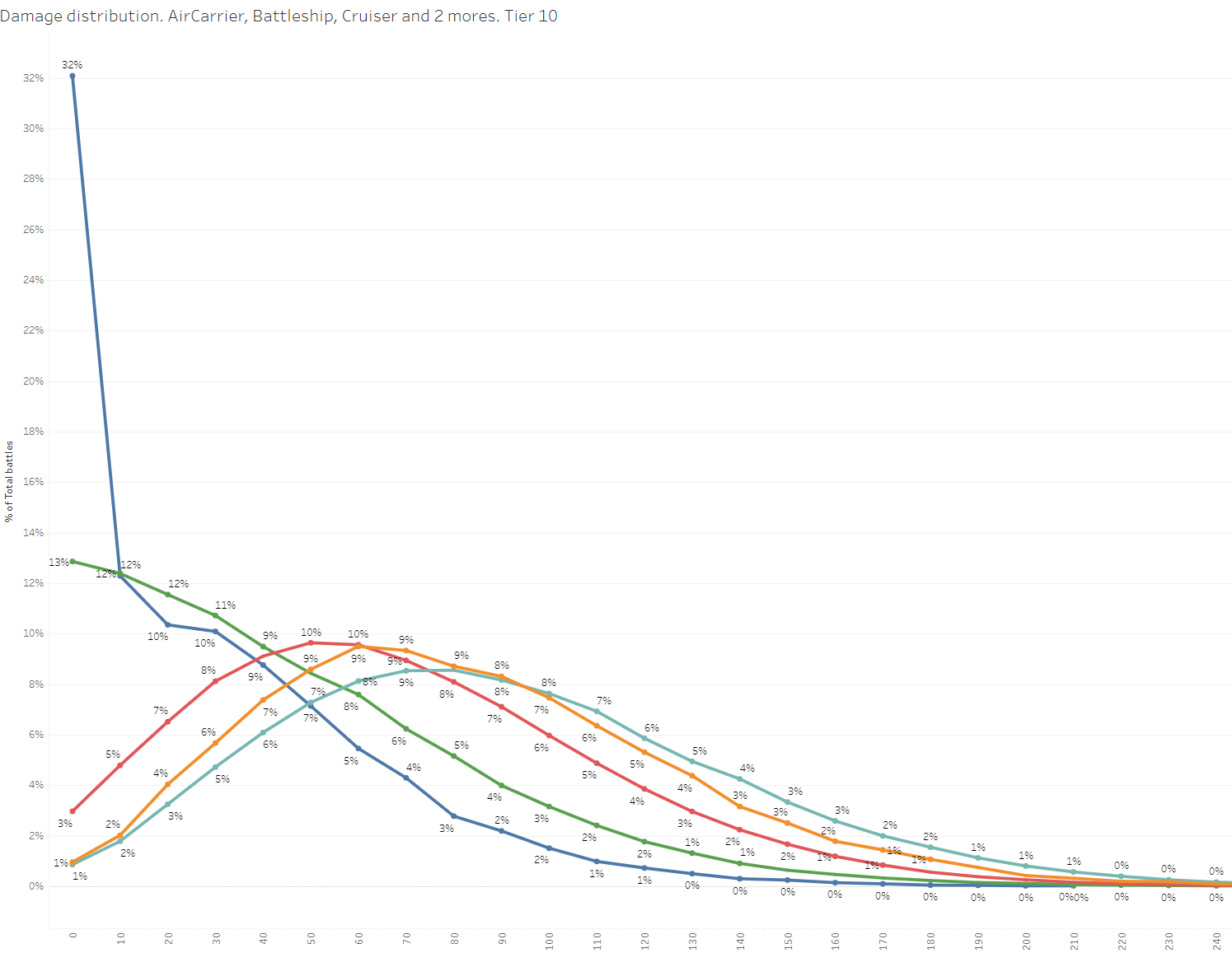 We didn’t plan for submarines to take away the title of top “scout” from destroyers and aircraft carriers, and by changing the scouting mechanics in 0.10.10, we significantly reduced the damage done to targets detected by submarines. Whereas in 0.10.9 they were close to destroyers in this respect, the new class is now roughly comparable to cruisers in terms of spotting damage.

By the example for Tier X ships:

One frequently mentioned topic is the difficulty of attacking a submarine with destroyers. Yes, indeed, this class and its depth charges are not the best way to destroy an enemy submarine right now. We want it to be a complementary, rather than a key target in combat for the destroyers, and their actions to be focused on fighting for key areas. In the earlier stages of testing, one of the most popular concerns, both for us and players, was the excessive increase in the load on the destroyers. The introduction of depth charges airstrikes allowed us to redistribute this workload among the different classes.

Although depth charges airstrike is currently risk-free, the settings of the individual bombs did not allow for reliable damage to submarines. The changes scheduled for release in update 0.11.0 are aimed at changing the effectiveness of the airstrike.

The popularity of submarines

Submarines at Tier X currently have roughly the same popularity as aircraft carriers, but slightly less so at Tiers VI and VIII. The new class already has an interested audience that plays submarines every period of availability. We don’t expect a significant change in popularity at Tier X, but we can expect a small increase at lower Tiers.

Below are the graphs of popularity (by number of battles) of ships of different classes of VI, VIII and X Tiers:

You mentioned that the planned changes for update 0.11.0 will significantly weaken the depth charges airstrike, but the purpose of the changes was to strengthen this type of weapon. The average damage of this weapon type has increased by about 2.5 to 3 times. This is a very significant change, and we are not sure if we will keep it that strong – we will share the final decision after additional analysis.

The graphs below show a comparison of the average damage received by submarines from airstrikes in update 0.10.10 and on the 0.11.0 Public Test. 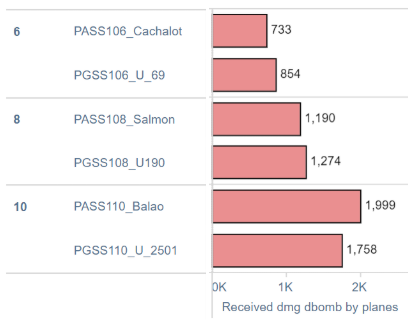 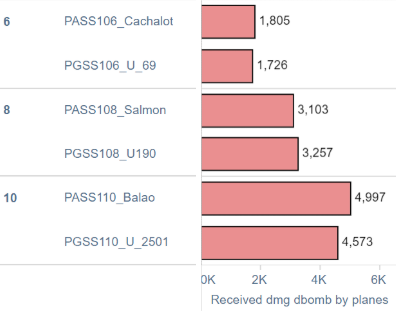 Based on the results of the 0.11.0 Public Test, we realized that the planned changes do not lead to the desired result – submarines remain insufficiently effective compared to other classes;

The two graphs below are a comparison of the damage caused by submarines in patch 0.10.10 and on the 0.11.0 Public Test.

We would like to thank you once again for your interest and passion for the development of the game. We strive to create the maximum variety of gameplay in World of Warships and submarines are a huge layer of possibilities, and your help in working on them is invaluable.