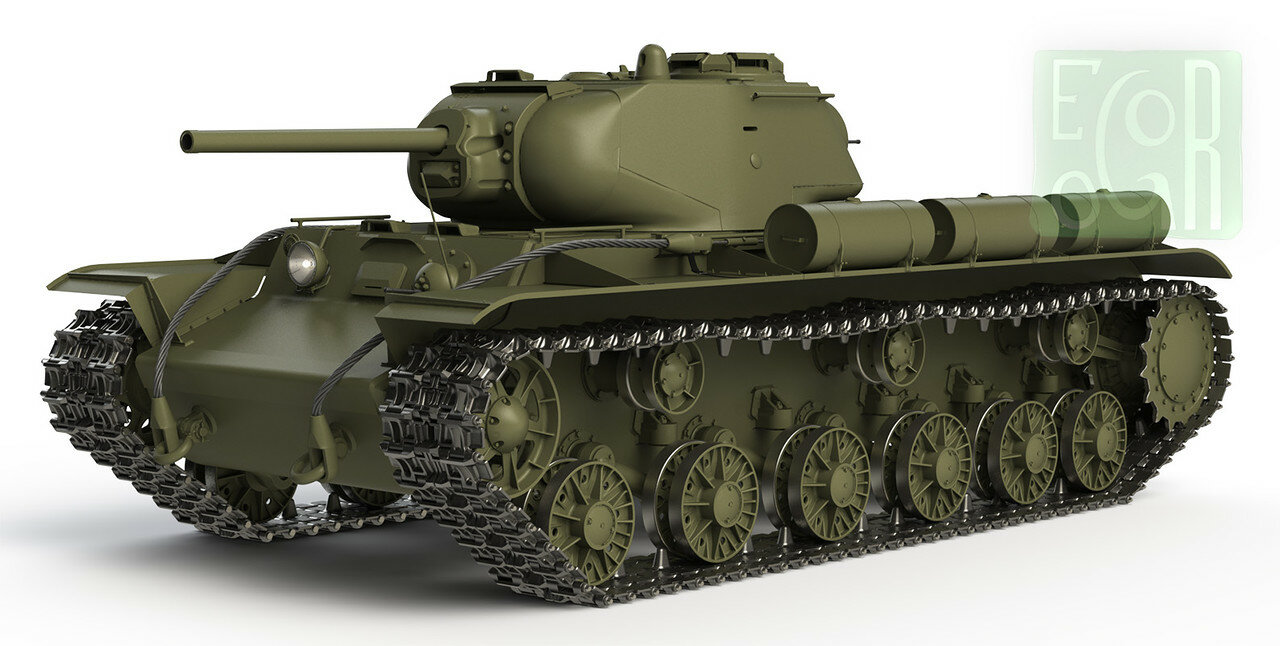 Big thanks to Xerkics (EU) for translating this!

The Voitolovo-Mginsky Offensive (Karbuselskaya operation) was held in the time interval of 19th March – 2nd April 1943 in the framework of a series of initiatives of the Red Army offensive “Polar Star”.

The main purpose of the operation for the troops in the Volkhov Front as part of the 8th Army was at the front of Voronovo-Lodva to perform a strike towards Sologubovka, in order to cut the supply lines of the enemy force at Sinyavinskaya-Mginsky and to meet with the troops from the Leningrad front in the area Voytolovo in order to make a joint strike that would be able to destroy the enemy forces. To achieve that, other regiments in the first echelon of the Volkhov Front had among them three separate Assault Tank Guard Regiments: the 50th Regiment using Churchills acted in the direction of Mount Pushechnaya to White Lake; 33rd and 35th regiments used the brand-new, KV1S’s just recently built in January. They were deployed in this order: the first in the northern area, Karbuseli, and the second towards Lake Barsky. The task was to support infantry attacks, moving with it and destroying gun emplacements and enemy manpower.

In the first 3 days, the 1st echelon of the 9th army penetrated German defenses in an area 8 km wide and then advanced forward about 2-5 km, however at this point the offensive stalled and from 2nd of April the units were forced to defend the area. The case was not only that the Germans managed to move reinforcements, but they actually stopped the advance of the Soviets. Based on the results of the battles that took part in the first day, the order N 027 was issued to the mechanised and anti armour forces of the 8th army which stated that:

1) There was bad cooperation within the forces, especially with artillery and infantry units. The tanks, after penetrating the frontal defense line of the enemy, got separated from the supporting infantry, and the support guns could not keep up with the tanks and were unable to provide supporting fire.

2) Tank Commanders weren’t keen in observing the battlefield and weren’t asking for artillery support in order to surpress the enemy’s anti tank guns.

3) The local Tank Company HQ’s did not know what infantry were up to and infantry is unaware of what tanks are doing. There were only clerks left at local Headquarters , they were also the ones who wrote up the battle documents which made it impossible to understand the real position of the company, nor the infantry and artillery actions.

4) Subcommanders ( 33rd guard tank regiment) were breaking the requirements of regulations and orders. They gathered everyone in the same areas, in the initial deployment locations, causing excess casualties from artillery fire, like on 19.3.1943, the 33rd guard tank regiment gathered 3 tank crews in order to move to Volhovskov Front N 015, and 1 shell caused casualties to all 3 crews. As a result all 3 tanks were unable to take part in the attack….

6) No refueling and rearming bases were assigned and some company commanders had to ask for permission in order to retreat the companies to rearm and refuel.

7) There was bad logistical control of the battlefield, in particular over driver personnel, which as a result caused each regiment to have tanks left stuck in craters or swamps and one tank from the 50th tank guard regiment fell from a bridge.

8) The Regiments communication lines with the higher HQ were highly disorganised. The communiques were largely written up by people with bad literacy skills and little understanding of command. In 33rd Tank Guard regiment the battle documents were not only written up and signed by their administrative clerk but also delivered with large delay.

As an example of point 7 you can see the fact that the 35th OGTPP ( Abbrevation for the tank guard regiment) lost 2 tanks by drowning.

One of them was successfully recovered and put back into action, but only by the end of April. Within the regimental reports its stated that the evacuation of said drowned tanks is only possible with the help of EPRON (Special expeditionary force for underwater operations).

There was little change in the way things were happening in the following days of the offensive. The lack of knowledge of the terrain was also taking its toll. So, as a result, on the 20.03 at 10:00, after the order of artillery fire to soften up the enemy position took place, the tanks of the 35th regiment were meant to attack the enemy position, however because of their infantry guides not knowing the direction of the attack the regiment spent 4 hours looking for the right position.

There also seemed to be specific problems in cooperation with the infantry forces directly during the time of the attack on 23.03. Out of the 12 tanks participating in the attack from the 35th regiment, 6 were taken out and 3 were disabled by mines. Infantry left the tanks to fend for themselves and as a result they were surrounded by the enemy forces. Only 2 tanks were able to stay in radio contact, and the fate of the crews of the rest remains unknown. The following 3 days were spent fighting trying to save those tanks with no success. 45 man unit from the 994 sp, specially formed for recovery of surrounded tanks, was lost in the process. Only at the end of the 3rd day, the crews of the tanks under command of Balabanov Vasiliy Nikolaevich and Muhanov Ivan Timofeich, who were able to stay in radio contact, were finally given orders to make their tanks inoperable and then break through the surrounding forces.

There are no records of the awards for the 5th members of the crews but in the report of the regimental command it’s stated that all 10 were able to break through the surrounding enemy forces. We can only list those extra crewmen that were part of the crews on 15.02 but its not a fact that those fighters were also surrounded. ~Those were: radioman-machine-gunner Snr Sgt Bogatirev I.E. from first tank and driver & loader Sgt. Artimovich D.S in the second tank.

Among the award document for the 33rd separate tank guard regiment you can see the statements for actions like :

– Enable the infantry to reach the enemy trenches then leave the tanks and lead the infantry assault on the trench;

Tankers of the Assault Tank guard regiment mostly had to fight against the reinforced gun emplacements of the enemy. Among the reports of the destruction of different gun emplacements like that the awards mention 37 and 50 mm and only single mentions of mobile guns.

The KV1S have shown themselves to be very durable machines. Also, the crews and regimental mechanics proved to be experienced, dedicated and smart, which can be seen from the exempts from the award documents. Here are some of them:

–Repaired 3 tanks under enemy fire and evacuated them from the battlefield;

–Restored and organised 3 tanks under heavy artillery and mortar fire;

–Repaired the tank and rejoined the battle;

–First got out from the disabled tank under heavy enemy fire and quickly restored it;

Even so the casualties were great. As a result of battle actions from 19th to 27th of March the 35th, the regiment lost of 39 people dead or missing. 9 tanks had to be classified as unrecoverable. Unfortunately there is no data on the tanks for 33rd regiment but one can speculate that they lost about 13 tanks. What is known is that the 5 tanks of the 33rd that remained battle ready were passed on to 35th on 15.04.

Miraculously one of the tanks which participated in that offensive survived to our days. In 2006 out of the woods north of Karbusel the search group “North-West” has recovered the remains of a KV1-S tank. It has been restored in the Nevsky Ship Repair Factory in Shlisselburg and in the January of 2007 it went on display at the exposition of “Breakthrough of the Blockade of Leningrad “. Which is near the village of Marjinonear on the bridge across Neva river near motorway P-21. 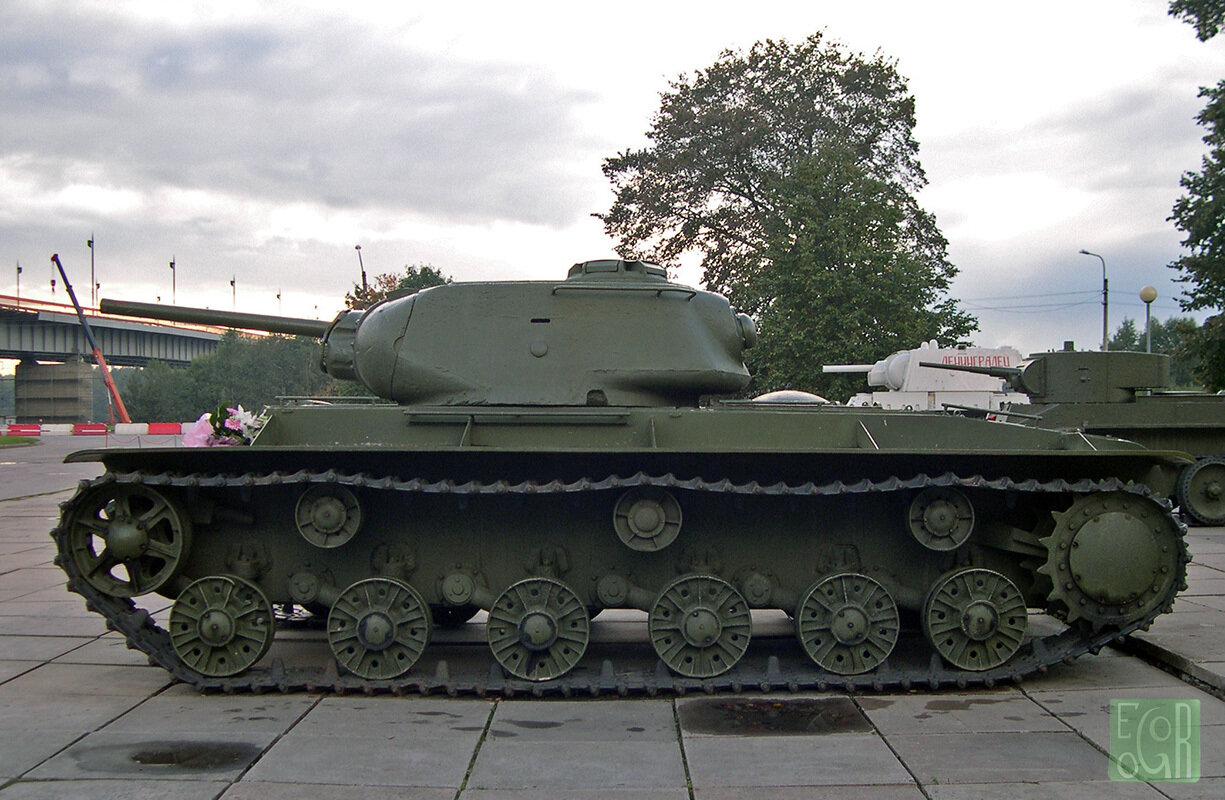 Quite possibly after the war, the tank has been cut into bits and was planned to be turned into scrap but something got in the way. So as a result it survived to our days but in quite sorry state. Unfortunately some detail was lost, however the restorers done a tremendous job but some things they just weren’t able to reproduce, some were done incorrectly and the tank is far from what it used to look like in its original form. I attempted to recreate the historically correct look of this machine at the point of it coming out of the production line.

The model and the renders were done in Solidworks. 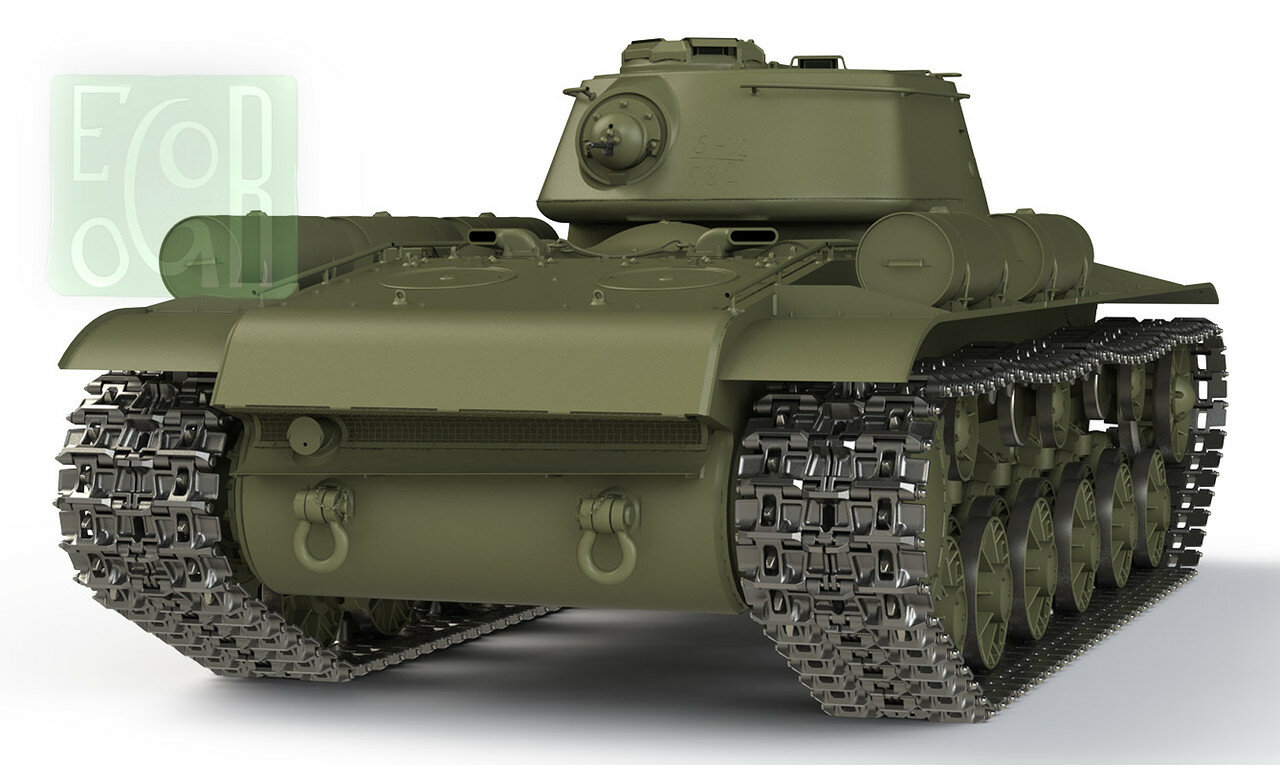 I would like to draw attention to the rear shield/deflector panel. It’s drawn crooked for a reason. It’s been welded to the body of the tank at that angle. Thats not the specifics of the model but an example of the quality of war time production. This also can be attributed to the location of small details such as the lifting hooks on the roof on different tanks; they could not only be oriented differently but also welded tens of millimetres apart from each others location on different machines. 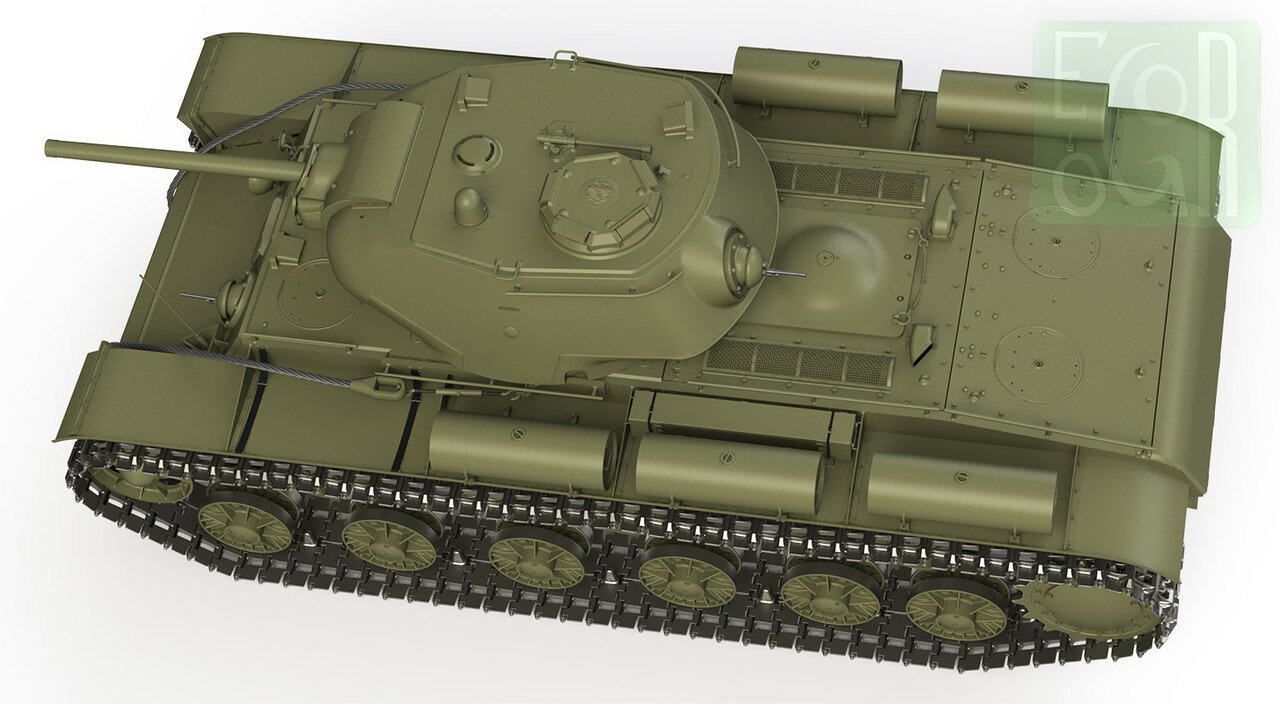 For this work we carefully measured the KV-1S with body of KV-1 that was on display in the village of Parfino in the Novgorodskaya region and also Object 239 that stands on a pedestal in Avtovo in St. Petersburg – prototype KV85, which served as a base for the 2nd prototype of the KV-1S which had the serial N 150002. I also looked at the non-dirty tank parts which were unfortunately far and few between and there are even less of these where you can get access to. 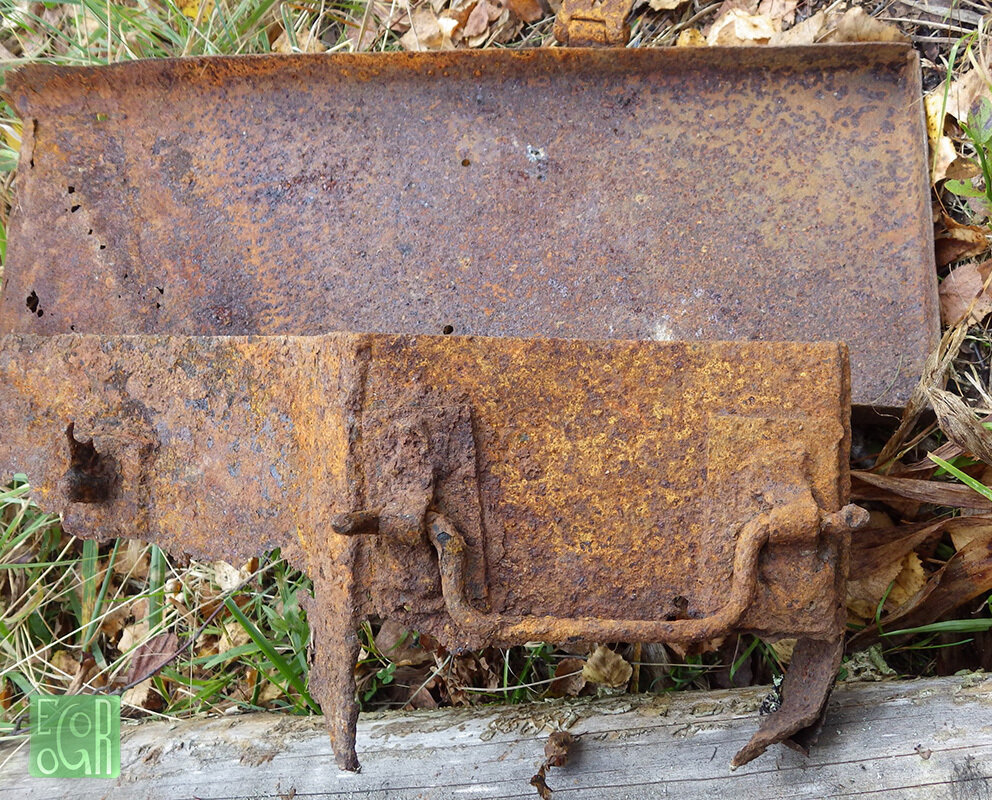 Whether they were from this KV1S or from another tank, it’s impossible to tell now. However even a small part helped me reconstruct the box itself. 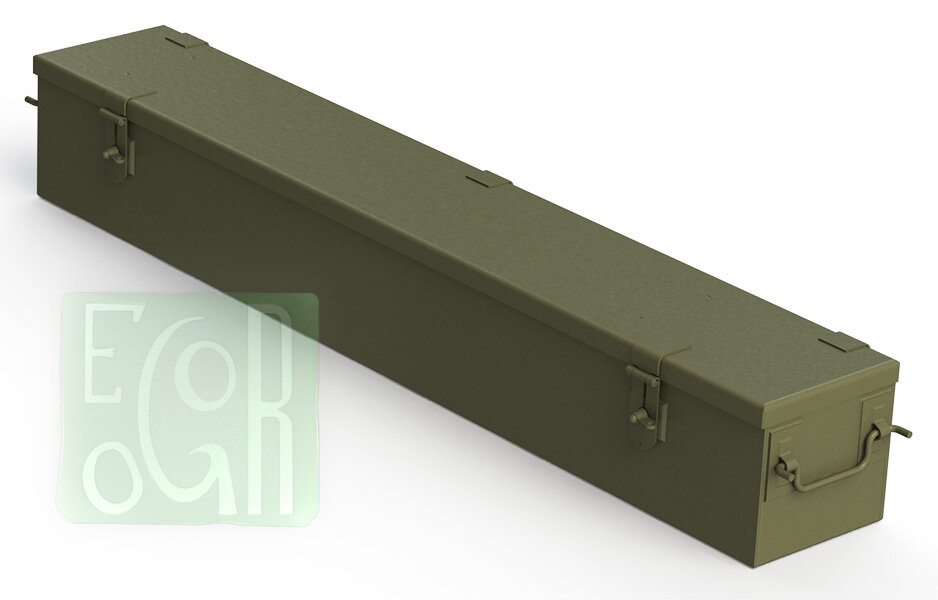 Unfortunately at this point we have been unable to recover the tank’s history . It’s hard to read its serial whether it’s 30188 or 30138. 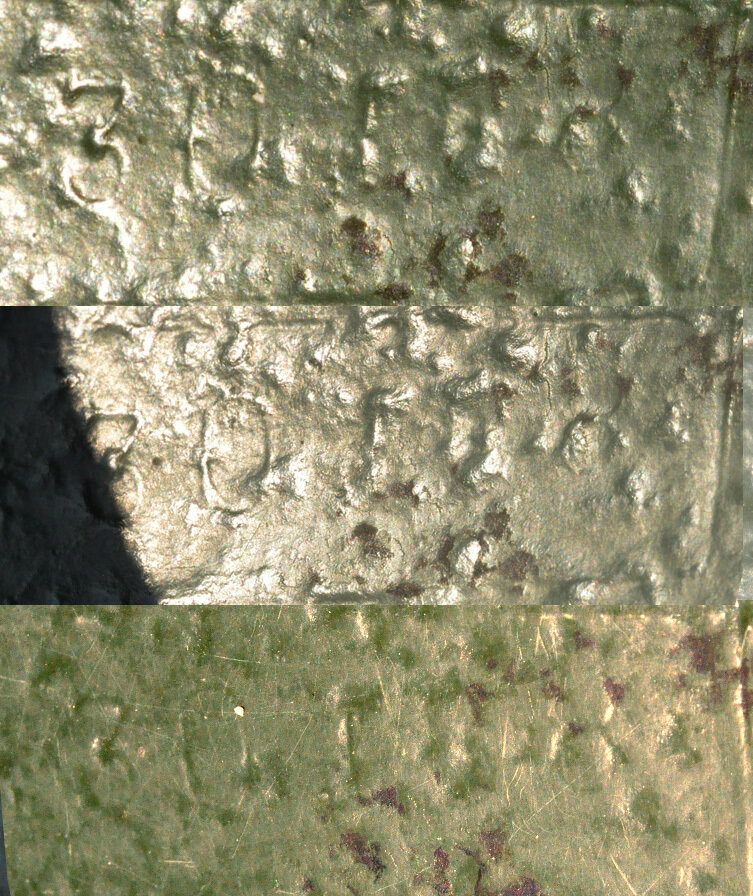 I personally think it’s the former. It’s known that the tank 30138 participated in action with the 35th regiment but the regiment operated about 4 km from this location. The only possibility is that the tank was among those passed on to 122nd TBR, which after ground around Karbusel in the north been able to cut the railway line east of Turishkino, and therefore quite possibly could end up here. And the tank N 30138 had been classified by 35th regiment as hopelessly lost, separated from the other lost tanks from the same offensive there, towards the end of April. However I have reasons to think that this KV1S that survived had more recently produced parts than the tanks of 35th regiment, especially the armouring of the antenna area. It’s known that the echelon of tanks for the 33rd OGTPP left Chelyabinsk 2 weeks later than the ones for the 35th regiment, and that the 5 tanks that were passed after the battles from 33rd to 35th regiment also have newer serial numbers. Especially there is one listed as N 30185 among them. And even though I don’t have any documents for 33rd OGTPP, the very fact that the regiment operated in this area is another argument in favour that the KV1-S from the exposition of “Breakthrough of the Blockade of Leningrad” belonged to that very same regiment.

Up to very recently in that area there were also remains of one more KV-1S, which most likely also belonged to the 33rd Guard Regiment.

However this tank was already sold to scrap a few years ago. If anyone has any more information or extra photos of this machine we would be very grateful.