Considering the fact that during WW1 Italy’s main fighting was done in the alpine areas on the border to Austria-Hungary, it is not remarkable that their efforts when it came to tracked armoured vehicles was not en par with those of Britain and France. Considering the weak industrial base of Italy, it can be called quite impressive, when you remember the circumstances.

While the Italians were quick to start experimenting with Armoured Cars, the first proper Italian Tank project was not begun until 1916, and was mainly the work of a certain captain by the name of Luigi Cassali: his idea was to build an armoured machine capable of moving cross-country, sporting two machinegun equipped turrets. Such a vehicle was actually built, by the company of Pavesi, who had experience in cross-country vehicles. This project – the FIAT 1000? – was abandoned after test had proved the limits of that particular design vehicle. A new project, the FIAT 2000, started instead in August 1916. The actual construction begun some two months later, in October 1916. (The project was semi-private, and begun before the Army even issued requirements for it.) The first vehicle was ready in June 1917. (Hence the alternative name “Type 17”.) The prototype initially lacked MG mounts and had a cylindrical turret with a flat roof. The turret was soon replaced with a domed construction. The design was really quite imaginative for its day and age. It was the first operational tank with a turret. The driver had a position offering an excellent view at the front, and could use either a large hatch, when out of danger, or a periscope when subjected to fire – an arrangement much superior to say, the British system of visions slits. The engine was placed well to the rear, making it and the petrol tanks less exposed to damage. The crew had plenty of room, as most of the mechanical components were placed under the floor. This compares favourably to contemporary British, German and French designs.

The Fiat 2000 was very heavily armed. The 65mm gun was short (L/17) but the traverse of the turret was 360 degrees, and the gun could be depressed down to -10 degrees and elevated to a position of +75 degrees, giving the gun a very wide field of fire.) It sported no less than seven 6.5mm Fiat MGs, paced in mountings with a 100 degree traverse. There were three MG:s on each side, and one directly to the rear. Almost all angles of approach were thus covered, leaving only a very small blind-spot directly to the front. The running gear consisted of ten road wheels. Eight of these were grouped together in pairs, on bogie units placed were low, skirting the tracks. These bogie units were sprung with elliptical leaf springs. The two remaining road wheels were placed between the end bogie units and the drive sprockets. The armour was considerable: it varied from 15mm to 20mm. This and the heavy armament made the vehicle very heavy at 40 tons. Power was provided by an 12 cylinder aero engine, FIAT A12, with an output of some 240 hp. This gave the FIAT 2000 a maximum speed of some 7 km/hr, quite good compared to other WW1 tanks. The large radius of the track front and the considerable length of the vehicle itself gave it adequate trench crossing and parapet climbing capabilities. It was however very high, making the vehicle both unwieldy and unstable. 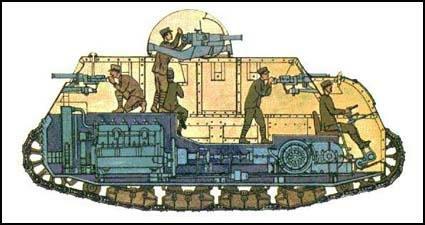 The two vehicles of the initial order were completed before the end of the war in 1918, but it is uncertain if they were ever used in combat in that conflict. Four more vehicles seems to have appeared in 1919. Some vehicles were later modified, having their front MGs substituted for 37mm guns. It was in service up until 1934. They were based in Rome, and mainly used for parades, fairs and sometimes manoeuvres. At least one FIAT 2000 was employed in Libya, seeing combat in anti-guerrilla duties against Arab insurgents, and one was also lost there.

The following have been supplied by Libor Matejka, Hans van Oerle and D. Przezdziecki, and the armor.kiev.ua website.