Before digging into deeper detail of the events of Market Garden, one must understand why this operation was planned.

After the successful establishment of getting a foothold on the European mainland it was Montgomery’s objective to get a bridgehead into Nazi-held territories. One of the main objectives was to secure the Allied flank in France/Belgium (Eisenhower’s benefit) but more importantly was the entering of Germany and bypassing the heavily fortified Siegfried line (Montgomery’s reasoning).

D-Day was mostly an American operation (planning-wise) and Montgomery felt the need to come up with a plan which the British were the architects of. The plan was to quickly secure all of the bridges crossing the main rivers in Holland, whereby the Germans had no chance to blow them up and slow down the advance. Once the advantage was seized, the Allies were going to be hard to stop. All bridges were to be taken by paratroopers, more or less all at once, followed by support in the rear by XXX Corps, the VIII Corps and the XII Corps. The paratroopers and tanks from the rear were to completely ignore what was happening on their flanks; this was a job for VIII and XII.

Eisenhower was not convinced, but Montgomery had everything worked out in detail and after some time they had concluded that both their goals could be reached by the execution of the same plan: Market Garden. 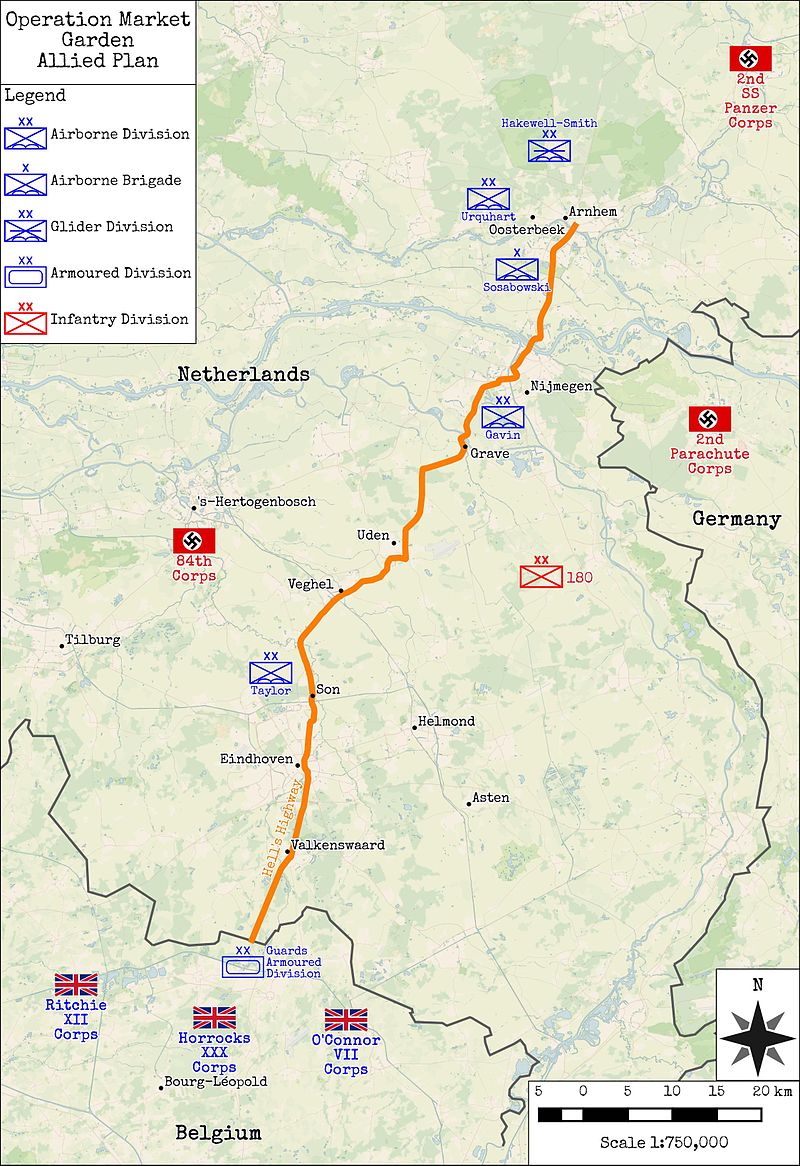 More problems started to arise however, as the causeway dubbed “Hell’s Highway” was often no more than an actual road. The surrounding ground and fields were so soggy, that the Shermans and Fireflies would often beach themselves on their bellies. They were therefore forced to only use the roads, making the advance prone to traffic jams.

Another problem of Montgomery’s plan to not pay attention to the flanks was that German forces could often cut the Causeway with guerilla tactics; wait for the tanks to pass, recapture the cross roads. Any reinforcements would then have to win the causeway for itself again.

But, now real trouble started as one bridge; allowing quicker access to Nijmegen; had been damaged in the battle between 82nd Airborne “All American” and the Germans. A train bridge had to be used as an alternative; the road bridge still firmly in German hands. The Nijmegen bridge attack was bogged down due to strong German defensive positions with 88mm guns, small artillery and infantry.

A Bridge too far

The British paratroopers could not hold out for long and one of the largest defeats in British WWII warfare was a fact.

The failure of Market Garden gave the Germans a bit of breathing space before they decided to attack in the Ardennes later that year with the goal of cutting off resupply lines of Antwerp. The delay meant the war was going to drag well on into 1945.