I downloaded the test server with the intentions of trying out the new features/tanks, as usual, and along the way I’ve gotten a general idea of how Japanese heavies are going to play.

So first things first, the Type 89:

This is a vehicle I haven’t really been able to try. It is large, cumbersome, and can’t really take a hit, but the gun depression, dpm, and damage per shot are among the highest at tier 2. Also, it’s a great collector piece for you GuP fans out there! Overall, it looks like a pretty solid tier 2, albeit slow and paper thin.

The first “true” heavy tank of the line, it is more or less a beefed up Chi-Ha. It looks and feels the part of a heavy tank, but lacks the armor to back up its classification. This is counterbalanced by the fact that it receives the same 47mm gun that is on the Chi-Ha, but the soft stats are improved. The gun depression, dpm, and damage per shot are again top notch, but again, it isn’t something that can rely on its armor. Overall, a decent enough tier 3 heavy tank.

Next, we hit a bit of a bump in the road with the Type 95 heavy tank:

In essence, this vehicle represents more of the same from the previous tiered vehicles. The key difference is that that the penetration of the 7,5 cm gun is only 70mm with AP. Sure, you could load up HEAT rounds that increase the penetration to 100mm, but against vehicles like T-150’s, you’re not going to be doing much. Basically, this thing is going to be pretty good at bullying thin skinned targets. It will, for example, chew up tanks such as tier 4 lights, mediums, and tank destroyers. The dpm, gun depression, accuracy, and overall gun’s soft stats are definitely not bad. However, this tank is bigger, slower, and less armored than both the B1 and DW2, and in tier 6 games it is often going to be an xp pinata. Nonetheless, it isn’t a long grind and it has it quirks, but it isn’t anything great.

Next, the O-I Experimental: 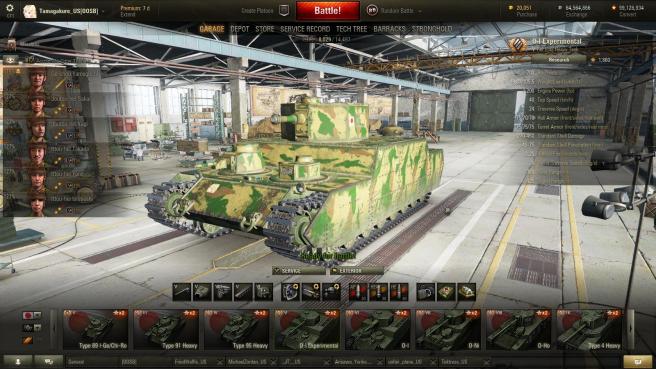 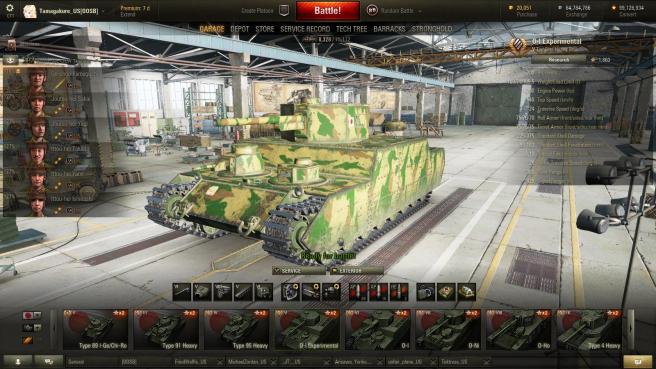 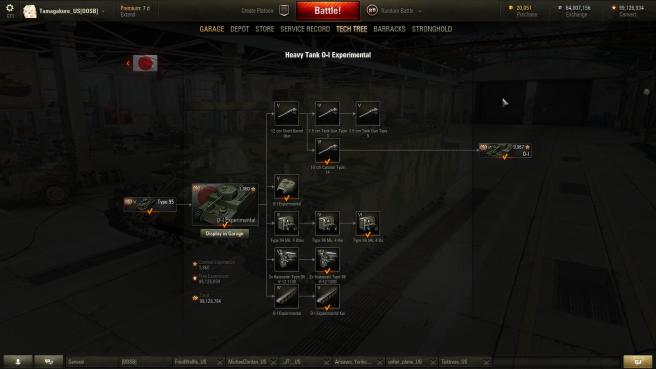 This is the first vehicle that I’ve been able to truly try out in the line. I must say at this point that I was impressed. The 10c gun seems to absolutely chew up same tiered vehicles such as the T1 Heavy and KV-1, and it is pretty exceptional for being able to out-trade just about every vehicle at tier 5. I didn’t find the soft stats to be bad for such a meaty gun, either. The 120mm derp also has its charm, and it can hurt anything pretty badly at its tier. As for the tank itself, it can sidescrape well, reverse sidescrape well, it can crest ridges effectively due to its great gun depression, and it gets around exceptionally well for a 100 ton tank. It’s almost comical seeing one of these moving because it can reach 40kmph on flat. I feel as though this is going to be a very potent ramming tank due to that mix of weight and speed. Arty can hurt it substantially due to the large size, especially on wide open maps with minimal cover. Overall, a very solid vehicle and it matches well against similar competition.

Next, the O-I fortress of doom:

What can I say. It’s a 150 ton monster that dwarfs just about everything in the game in terms of raw size. It gets a choice of two very potent guns, one being a 15cm that has surprisingly good gun handling and the ability to seriously hurt anything in its path, and the other being a 10cm with good penetration and damage per shot. The gun depression is great, and the frontal turrets do not hurt it much, as this thing can again work ridges and such. The mobility never really felt poor, and it can do ~30kmph on flat. In terms of raw armor, it is one of the best at its tier, with 150mm on the majority of the front, rear, and turret. You can sidescrape with its spaced side armor being able to absorb shots really well, you can poke around corners and watch people richochet off your upper plate, or you can reverse sidecrape and bait people to shoot your rear armor, which has a portion that is angled back 45 degrees or so at 150mm thick. Arty is definitely a threat to this vehicle and will punish it, especially on wide open maps. Overall, this is probably my favorite vehicle of the line, and it is in essence either a better KV-2 or a better T-150. Definitely a keeper for me. 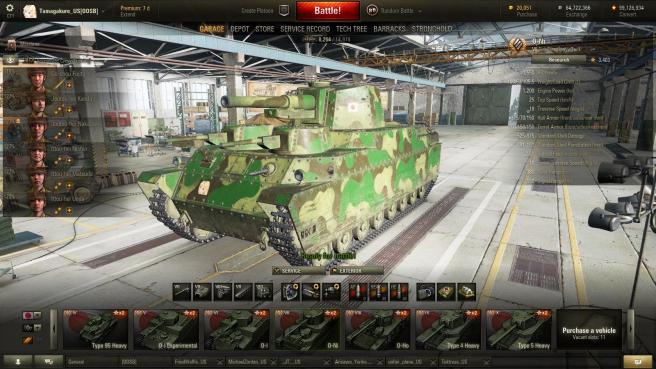 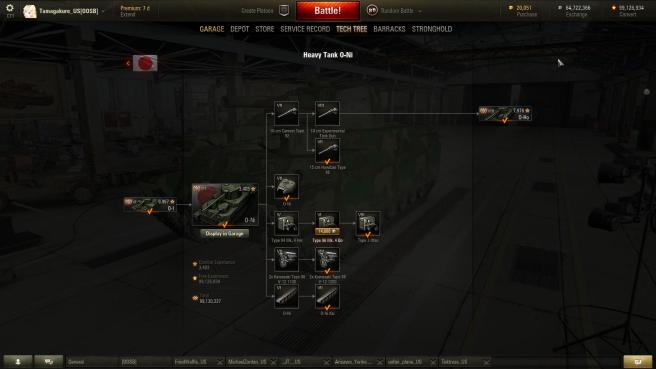 I’ve been having a love-hate relationship with this vehicle. It is bigger than a maus and extremely long and tall, and it turns incredibly slow. The armor also doesn’t really hold up against even premium ammo from other tier 7’s, and the side armor is atrociously bad. The turret is quite thick all around and can bounce quite a few shots. The shoulders are weak and prevent much angling. As for the gun selection, the 10cm gun is honestly very mediocre, with decent pen and alpha, but poor accuracy and aim time. To add to the negatives of the 10cm, it has some of the worst dpm at its tier. The 15cm from the O-I carries over with better soft stats and a much meatier look, and it can severely cripple even vehicles that the mediocre 10cm cannot take on. Gun depression is good and the turrets on the front do not hinder it particularly much. Overall, the tank is somewhat a fortress when top tier, and is mediocre when bottom tier. Not great, but not particularly terrible, either. It could use a dpm and gun handling buff. In regards to arty, hits to the side and engine deck ruin this thing, and since it is possibly the tallest and longest tank in the game, it is quite a large and juicy target for SPG’s. 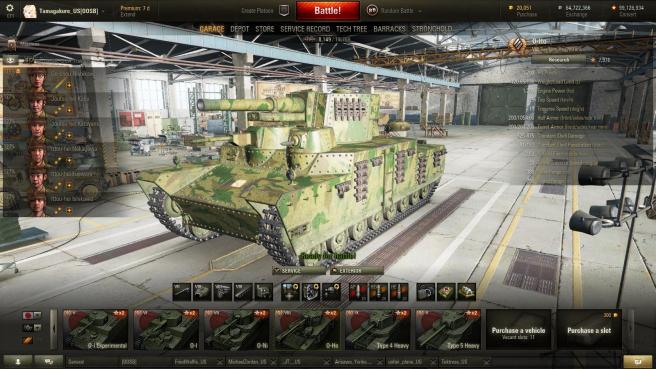 The O-Ho is honestly one of the most appealing tanks to see visually in the line imo. Performance wise, mobility isn’t too bad, and the frontal armor is definitely good. It keeps the shoulder trend that is among all of the high tier tanks in the line, but unlike the O-Ni, the shoulders are just as thick as the rest of the front and are small and a bit angled. The turret is thick and flat all around and can cause quite a bit of bounces. The side armor is relatively thick and spaced, which does allow for a bit of sidescraping. Overall, the armor is prone to premium ammo spam. The gun depression is terrible from the front due to the mini turrets, and you have to position your vehicle right in order to make use of the great gun depression otherwise. The 10cm has extremely good dpm but everything else is pretty mediocre, with a poor aim time, accuracy, and penetration. Unfortunately, it also receives no premium rounds, and 215 pen with bad accuracy does not cut it against hier tier heavies. The 15cm, however, carries over again to this tank, with its soft stats significantly buffed from the tier 7. At this point, HE is your best friend with this gun and it can generally do 3-400 damage to just about anything that it hits flush on. As for thinly armored vehicles, you can expect some very high damage results. Arty loves this tank, and does not have much issue targeting it. Overall, it is again a bit hit or miss, especially with the 10cm.

The first vehicle without any sort of mini turrets, the Type 2604 is quite a monster for a tier 9 heavy. Slow, lumbering, and weighing in at over 160 tons, it is the second heaviest tank in the game and one of the slowest. The traverse speed isn’t bad, and the armor is quite good and very thick frontally. The shoulders are weak and can prevent effective angling and sidescraping, however, this vehicle actually can reverse sidescrape very well, making full use of it’s thick and spaced side armor. The turret is flat and thick, and premium ammo spam can eat this tank up quite a bit, but good gun depression allows for abuse of ridge lines, which can negate that a bit. The gun can out trade anything at its tier excluding a few tier 9 td’s, but suffers from poor accuracy, aim time, and dpm. Arty can ruin this vehicle depending on the map and has a large impact on its effectiveness in battle. Overall, it is a slow, lumbering, but extremely punchy vehicle that has quite a bit of durability when used right. 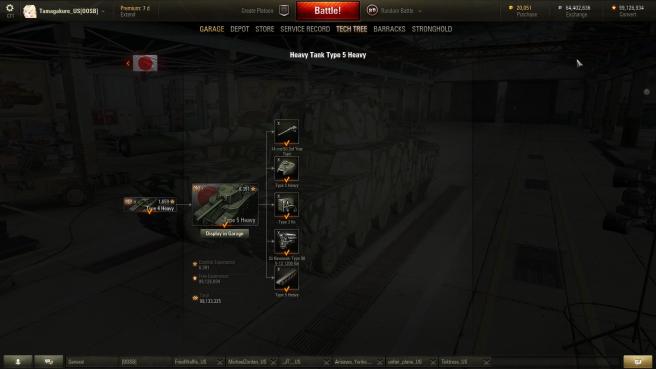 Definitely the most visually appealing of the entire line, this tank also brings some very big strengths to the table. Not only is the armor improved from the tier 9, the weight is actually reduced and the mobility is back to a comfortable 25kmph. This tank honestly feels like a mix between an E-100 and a Maus. It has the same 140mm from the tier 9 with improved soft stats, and the gun performs quite admirable, albeit low on the dpm side. The gun depression is again very good, and the frontal armor is also very thick and durable, but prone to premium ammo spam. Side scraping is not reliable from either side due to the large and pronounced shoulders, which are also thinner than the rest of the frontal armor. The tracks and side armor tend to eat a lot of shots, and overall this thing is a monster at trading hits. Peaking around corners with its shoulders hidden, it is perhaps the toughest vehicle in the game. Arty however chews it up, and hurts its impact on the battle greatly. Overall, it is a relatively solid tank and worth grinding for, but could use some buffs to its dpm to increase its effectiveness.

Overall, Japanese heavies are definitely something that are not for everyone. Arty and premium ammo will have an impact on them, but for the most part they get awesome firepower and quite a bit of trollish armor. You will often their huge size limiting them in terms of where they can go, and they will generally be spotted long before other vehicles, but they can generally out tank same tier heavies and can push flanks more reliably than most vehicles. Due to the developing theme of shoulders at the high tiers, sidescraping is not always the best idea, and smaller and more nimble vehicles can often take advantage of their huge size and low traverse speeds. I know for certain that I will be grinding them due to my bias for everything impractical and obsurd, but they are definitely not for those who favor flanking, mobility, and vision games.